The Aquarius Key - A Novel of the Occult 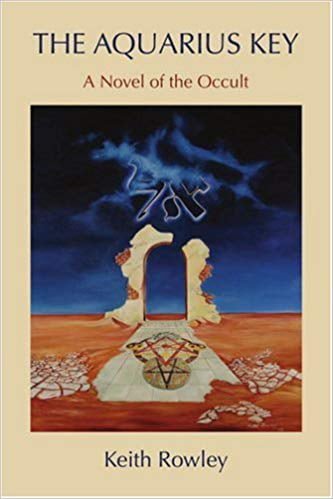 Nothing can prepare Bill and Sue Williams for the assault on sanity set in motion by those who seek the Qabalistic keys to the scripture of the new eon. Beset by nightmares, overwhelmed by acts of betrayal and ritual murder, their lives are changed forever by forces they cannot see or comprehend.

For Aaron Steen, the culmination of his lifelong quest for the Aquarius Key approaches. Manipulating the shadow power of the Qabalah, he sets in motion a sequence of events that will change the world forever, replacing the gods of Christ and Mohammed with a darker power, establishing a priesthood that will dominate humanity for the next two thousand years.But he has little time. The ceremonies of blood must be completed; the Key Bearer must yield up the Holy Key; the Key Bearer must die.

And all the while his enemy approaches, desperately seeking the truth in a world of Magick long discarded and forgotten by modern humanity.Set in present day London and the stark beauty of North Wales, The Aquarius Key lays bare the history and practice of the ancient magical arts of Qabalistic Magick and the legacy of the West's greatest magician, Aleister Crowley.

Get to Know the Book

Most novels on the subjects of magick and Kabbalah tend to fail the test of adequate research; this is not true of The Aquarius Key, which is the outcome of many years of research into the life and work of Aleister Crowley (1875 - 1947). Although the book is fiction, it provides within its narration a solid and accurate account of the training of an adept of the Western school according to Crowley's methods. Unusually for a novel, there is also an appendix containing key notes on points of magick with which the book in concerned.

All of this sounds rather serious for a casual reader, but the book has received excellent reviews from a variety of readers purely for its entertainment value. It is available on Amazon.com. 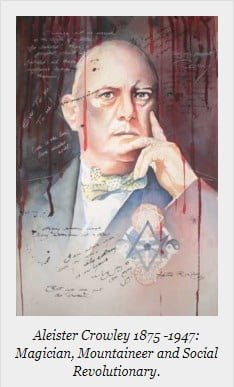 Dubbed The wickedest Man in the world by the British press, Aleister Crowley scorched his way through five decades of almost uninterrupted scandal.Born in 1875 into a family of Christian zealots attached to The Plymouth Brethren, Crowley was educated at Cambridge and in his early youth became one of the world's foremost mountaineers, pioneering new techniques of ascent in regions as diverse as Beachy-Head and the Himalayas.

Crowley's chief work and legacy was in the development of scientific magick and mysticism, redefining the western esoteric tradition around his own doctrine of Thelema. Crowley's insights into magick were profound -
"... you realize that magick is something we do to ourselves. But it is more convenient to assume the objective existence of an angel who gives us new knowledge than to allege that our invocation has awakened a super normal power in ourselves.... Diary 27 March 1947 - Quoted from Perdurabo by Richard Kaczynski.

Magick ceremonial and otherwise is concerned with the navigation of the world that acts as a backdrop, as a living archetype to ours, powers and structure and with its interaction with our 'real' world.
So what Crowley is suggesting here is altogether the viewpoint of a mystic even though it might accord well with the understanding of a psychologist or psychoanalyst. So what is the 'truth'? - this may sound trite, but if it works for you, then it's true.

Each of us lives in his/her own subjectively created universe, drawing on the knowledge and myths in which we are immersed and building our own reality. But this is not fantasy, because by using the power of consciousness, by tapping into the power of the natural world and of others around us, we shape the outcomes we so desire from life, we shape our own outcomes. We see this clearly around us - those who believe they are born to succeed do so and those who think themselves born to lose live terrible lives - belief is everything!

Belief must be coupled to reality! It is not much use applying for a job as a mathematics professor if one has neither the qualifications nor the experience - and magick cannot help any more than the laws of physics in that respect. But magick as a way of life can certainly focus your mind and bring out the very best of your mathematical ability, driving you towards your goal - that is real magick! Of course, some will achieve these things by invocation of of 'external' intelligence, and by harnessing the power of the natural world of the Tree of Life that underlies physical existence - it's all the same as long as the results is what you willed, for as Crowley said, Thou has no right but to do thy will.

But reality encompasses so much more than three dimensions of space and one of time. Each age of the world imposes its own conditions on our consciousness. For example, the world has just passed through the age of patriarchy, driven by the force of 'God the father', in the guise of Odin, Christ, Allah and a host of other aspects of the demiurge. Strong evidence dating back to the neolithic suggests a preceding matriarchal age within which was a predominance of feminine images and customs.

The mystical viewpoint is that these conditions did not originate in the consciousness of humans, but rather that the world transited the ages of Isis and Osiris (using the Egyptian nomenclature). According to Crowley we are now in the age of Horus, the crowned and conquering child. this is what he said:-

"Democracy dodders. Ferocious fascism, cackling communism, equally frauds, cavort crazily over the globe. They are hemming us in. They are the abortive births of The Child, the new aeon of Horus. Liberty stirs in the womb of time...the establishment of the Law of Thelema is the only way to preserve individual liberty and to assure the future of the race...This is the age when men and women regain their innocence, reborn as The Child, but what a child!"

The Aquarius Key imagines what might happen if the real key to Crowley's doctrine of Thelema, the key to the psychology of this new age was a tangible code, embedded in the mind of an unknowing human being, an heir to Crowley who through such knowledge could wield a massive psychological power over the human species. To illustrate this, think of the power wielded by Hitler through the power of the swastika, the power of Christ through the symbol of the cross. What would the key and symbol of Thelema be comprised and to what lengths would those who would rule us resort to acquire it?

That is the chief premise of The Aquarius Key, a work of fiction and speculation woven around a solid substratum of historical and spiritual knowledge, I hope you enjoy it.

Artwork Created for and Related to the Book 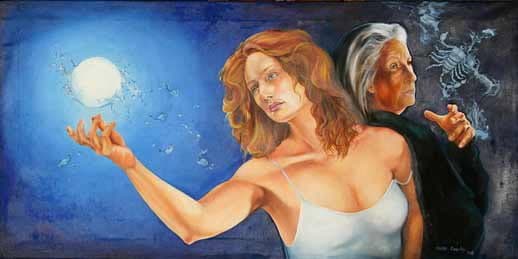 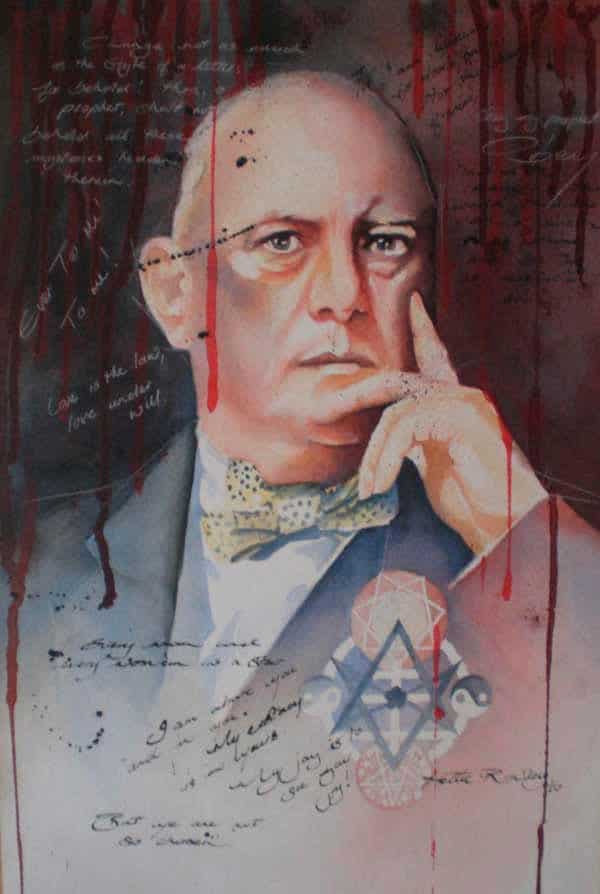 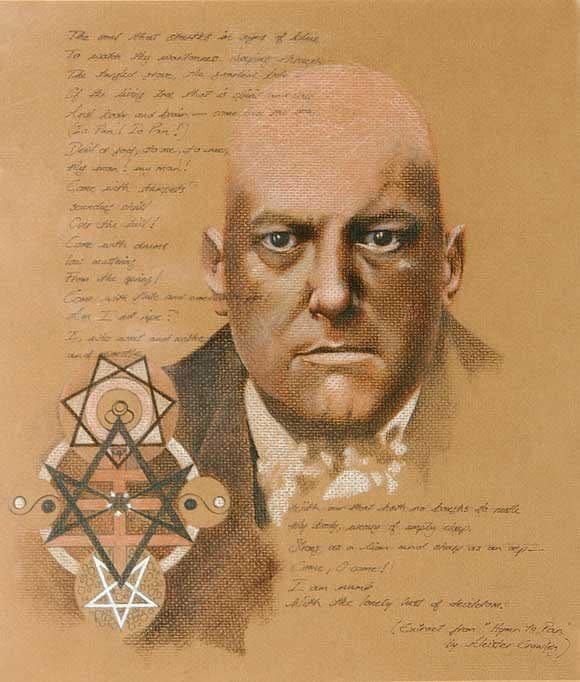 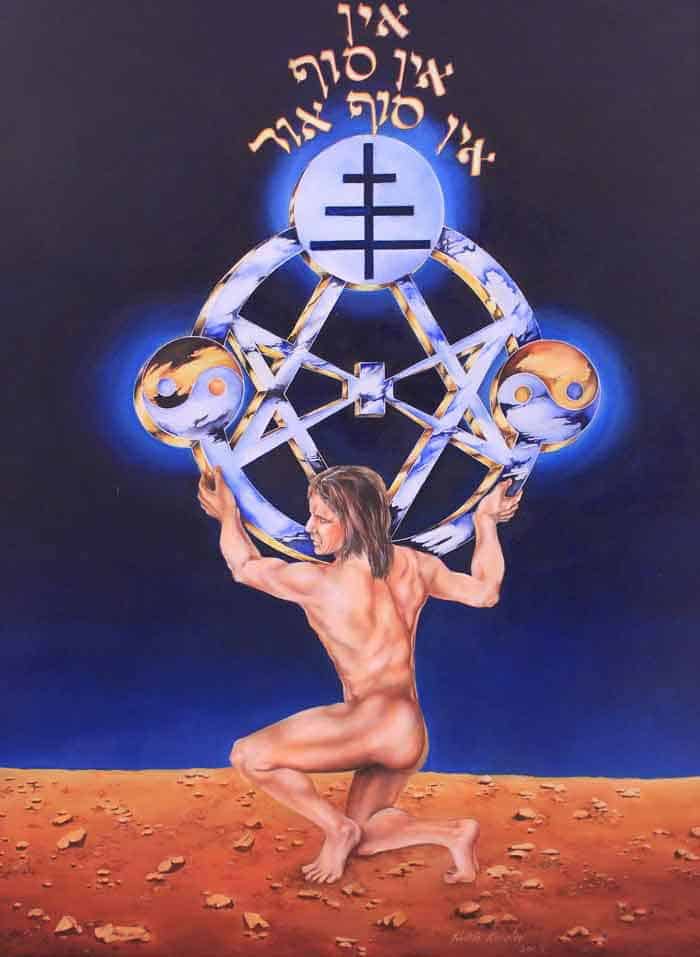 The Burden - Oil on Canvas 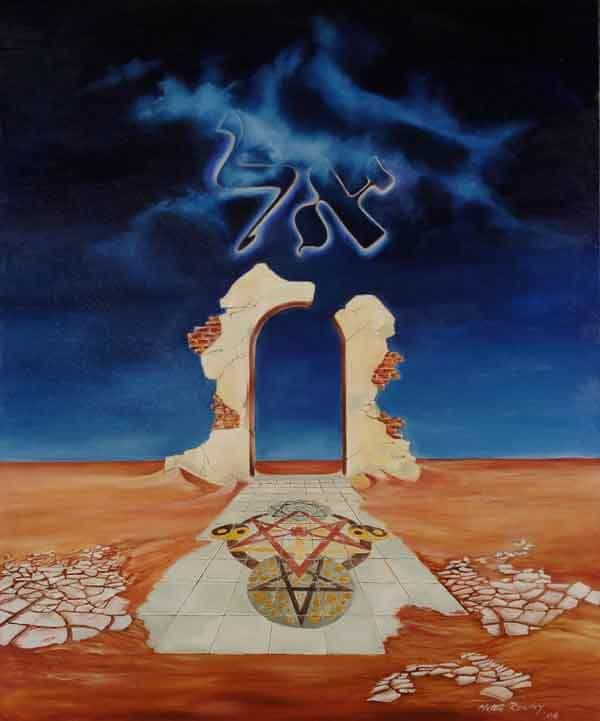 The gateway - Oil on Canvas 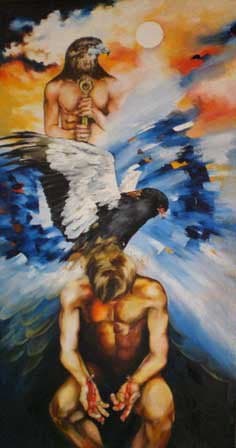